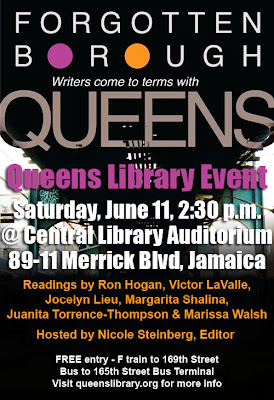 Another month, another Forgotten Borough event! This time, we're heading into Jamaica, Queens, this Saturday, June 11 for a reading at the Queens Central Library, starting at 2:30 p.m. The library is located at 89-11 Merrick Boulevard, and the event will take place in the auditorium.

Entry to this event is FREE, and you can get to the library via the F train to 169th street. A number of buses also travel to the nearby 165th Street bus terminal. Visit queenslibrary.org for more info.

Forgotten Borough in Philadelphia on May 21! 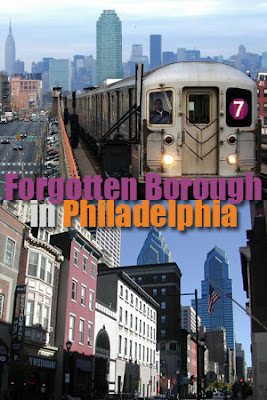 We're taking Forgotten Borough on the road to Philadelphia! (Well, technically, I live here now, but it's still a two-hour trip from Queens!) If you're in the area, come to our special event at Robin's Books and Moonstone Arts Center on Saturday, May 21 at 4 p.m. for readings by RON HOGAN, BUZZ POOLE, and editor NICOLE STEINBERG!

By the way, this event is FREE! Robin's Books and Moonstone Arts Center is located at 110A S. 13th Street in Center City, Philadelphia. For more information about the event and our readers, visit our Facebook event page.
Posted by Nicole at 9:36 AM No comments: 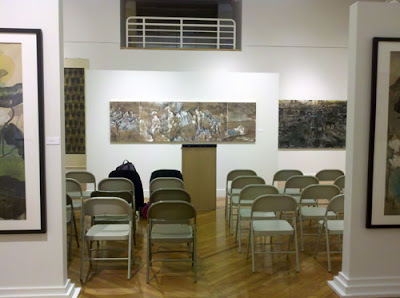 Thanks to all who came out for our Queens College event in the Godwin-Ternbach Museum of Klapper Hall this past Tuesday night—above is the lovely museum space where we held the reading. All of our readers were fabulous and it was great to meet and greet lots of new people, especially the Queens College students who stuck around after class!

HUGE thanks, once again, to Nicole Cooley and the Queens College MFA Program in Creative Writing and Literary Translation, as well as the Queens College communications department, for helping to put this special event together and doing such an incredible job of spreading the word.

Check out some photos of Tuesday's readers, all of whom contributed their work to Forgotten Borough, and who either teach at Queens College now or have in past years: Rigoberto González, Nicole Cooley, Jocelyn Lieu, Roger Sedarat, and Jayanti Tamm. 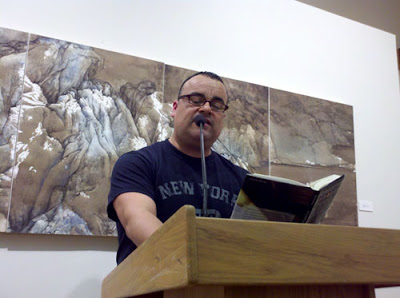 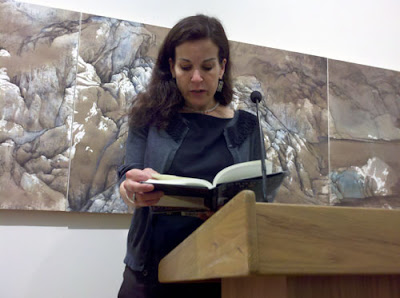 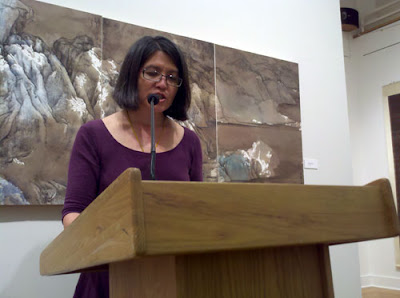 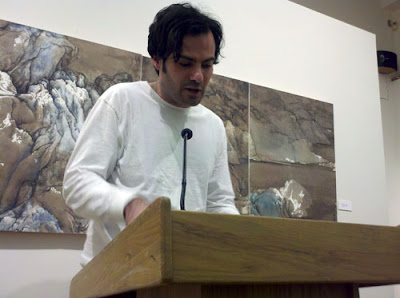 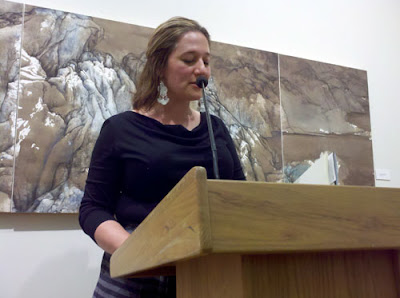 Jayanti Tamm
Posted by Nicole at 11:23 AM No comments: 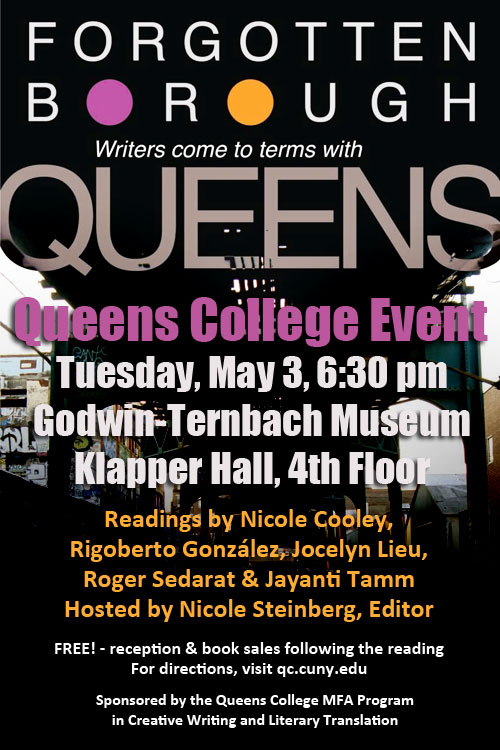 Don't forget that our big Queens College event takes place TOMORROW, Tuesday, May 3 at 6 p.m.! The reading has been featured all over NYC media, including the Daily News, Queens Chronicle, and TimesLedger! It's a CAN'T MISS event!

Head to the Godwin-Ternbach Museum on the fourth floor of Klapper Hall and enjoy a FREE evening of readings from Forgotten Borough, featuring the following contributors, all current or former instructors at Queens College:

The readings will be followed by a free reception and copies of the anthology will be available for sale. Check out the Facebook page for more information and to RSVP, and visit the QC Web site for directions.

Hope to see you there!
Posted by Nicole at 10:15 AM No comments:

Queens: The New Queen of Media!

Two more press links today, in anticipation of our big Queens College event this Tuesday, May 3, happening at the Godwin-Ternbach Museum in Klapper Hall.

From the Queens Chronicle piece:

The reading is a reminder that Queens is a contender in the literary world, writers said. An increasing number of authors are choosing to reside in Queens, and there are an increasing number of literary readings, in a variety of languages, especially in places like Jackson Heights, Sunnyside and Astoria. And, as [Nicole] Steinberg and [Nicole] Cooley point out, it’s hard to beat this borough when it comes to diversity in what sustains authors — food and, more importantly, language.

Thanks so much to Anna and Kori for this great press!
Posted by Nicole at 1:29 PM No comments:

Putting in a word for Queens

Superb press coverage for Forgotten Borough! The New York Daily News has a feature on the book today, in anticipation of our big May 3 event at Queens College, with insight from two of Tuesday's readers: Nicole Cooley and Jayanti Tamm.

Among the authors scheduled to attend are poetry Prof. Nicole Cooley. She moved to Astoria in 1999 from Pennsylvania, where she had been teaching at Bucknell University.

"I loved just wandering the streets," said Cooley, 44, who often explored the area around Ditmars Blvd. and 21st Ave.

Also included is a piece by Queens College graduate and visiting professor Jayanti Tamm, who grew up as a follower of religious leader Sri Chinmoy in Jamaica.

She has since left what she views as a "cult." Her passage notes alleged sexual abuse by Chinmoy of her fellow followers.

"Queens is really this silent borough in terms of art," said Tamm, 40. "While Queens has been overlooked, there is this treasure-trove of artistic talent."

Check out the article at the Daily News Web site! Big thanks to Nicholas Hirshon for writing the piece.
Posted by Nicole at 12:32 PM No comments:

Dig the above image from Alamedainfo.com. That site has all sorts of images dating back to the 1964–65 World's Fair in Flushing, Queens. As anyone who's passed through Queens probably knows, some of those structures still stand today, most notably the Unisphere and the observatory towers, famously known as the secret spaceships in Men in Black. A friend of mine just got a tattoo of those towers, which I love.

If you have a moment, you should check out the Wikipedia entry on the World's Fair. The history is fascinating, not to mention all of the attractions of the fair itself. I think my favorite is General Electric's "Progressland."

In other news, a very big thanks to Red Weather Review for their recent write-up of Forgotten Borough, which includes a rumination on all those Queens writers who don't stick around their hometown:

The secret about the huge slab of New York City called Queens is that many of our country’s most gifted writers have lived there. Yes, I use the past tense. With Manhattan so close–and with other glitzy places (not to mention teaching and other posts) beckoning from across the country–Queens-born writers often leave. But before they do they are immersed in humanity in a way that is still rare elsewhere. With a population of immigrants from throughout the world, the borough provides an extraordinary window on our country’s multicultural future.

Click here to read the review in its entirety!
Posted by Nicole at 8:37 AM No comments:

Don't You Forget About Queens